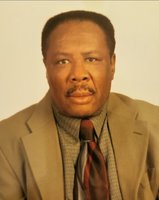 RICKETTS, Vincent W. It is with deep sadness that we announce the passing of Mr. Vincent Ward Ricketts on Wednesday, June 17th 2021 peacefully at home surrounded by his wife Purphena and his cousin Floyd Ambersley. Vincent affectionately known by his wife as “Vince” was born in the parish of Westmoreland, Jamaica and has made Toronto, Canada his home for more than 40 years. He was born on January 9th, 1941 to Viola & Joel Ricketts . 2nd child of two siblings Jean Ricketts. Vincent received his education at the infant school at the Cottage school in Westmoreland, Jamaica. During his early childhood memories he enjoyed going to sabbath school with mom and his sister. In Jamaica he held several jobs with this last role as a supervisor at Prince Royal Supermarket in Kingston, Jamaica. He soon migrated to Canada to experience a better life for himself and his extended family. He soon furthered his education and worked over 25 years at West Park hospital as a nurse's aid. One with strong work ethics, persistence he did not stop short of making sure the patients heard one of the jokes. In 1986 he was introduced to Purphena and they later married. During their marriage they enjoyed shopping, laughing, baking, gardening and just relaxing. The two peas in a pod helped raised a blended family which consist of Gary, Anita and Jerome (C.J.). Life had its challenges but together they pushed through often work at jobs where most people would not. They were determined to make a better life in Canada. During is passion of making a better life, he was forced to retire due to a work related injury. While at home he became a CNN expert in politics. As time progressed he spent more time with family and friends. Unfortunately some time later he was diagnosed with cancer. He surprised the doctors and lived beyond their timeline. You see Vincent was on God’s timeline. On June 17th, 2021 the Lord decided it was time to call him home and so he said his last good-bye peacefully at home. Vincent leaves behind his wife Purphena of over 30 years, sons Gary and Jerome (C.J), sister Jean, niece Delores (his favourite) and grand-niece Sandy, cousins, Floyd, Dennis, Gasford, Monica and many more. Viewing will be held at 10 a.m. to 11 a.m. service Monday June 28th 2021 at 11 a.m. Downsview Seventh-day Adventist Church 37 Bakersfield Street North York Ontario m3j 1084 The service will be livestreamed on the Covenant Funeral Homes YouTube and Facebook page. In accordance with capacity restrictions due to Covid-19, attendance will be restricted to invited guests. Funeral arrangements entrusted to Covenant Funeral Homes Inc. (Balmoral Chapel) 2505 Eglinton Avenue East, Scarborough, Ontario M1K 2R1. Telephone: 416-265-2652